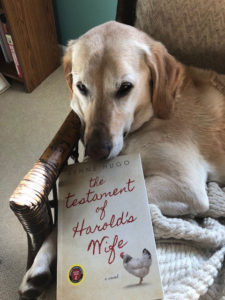 I have always been an animal lover. Possibly, like enough of my identity to be embarrassing, it was born of rebellion against my parents. Well, actually my mother. It was she who was most vocal in her adamant refusal to let me and my sister have a pet. Jan and I wanted a dog, we begged for a dog.

“They shed. They’re unsanitary. They bring in dirt and germs.” My mother chanted whenever one of us brought up the subject again. So naturally, the minute I was truly on my own, I got a dog, only to discover that my mother was absolutely right, at least about the amount of hair and dirt I’d live with. She hadn’t even mentioned that dogs also throw up on your good carpet as opposed to your ceramic tile whenever they’ve found something dead to eat out on the trail.

Despite these immutable facts, my husband and I have had a dog ever since we’ve been married. My mother had had no clue about the astonishing love factor. Our dogs are always rescues because we believe in it, and, because we’re also hikers, we’ve taken to adopting Labs; we live right near woods in which well-trained dogs are allowed off-leash. Which leads me to Scout, my Labrador retriever, who is well-trained. Occasionally.

Rather than going on about Scout’s inclination to go deaf when one of us shouts, “Leave it! Don’t eat that, don’t roll in that!” here’s the thing I want to tell you. Before THE TESTAMENT OF HAROLD’s WIFE, all my books have had dogs in them. Important dogs. My last two novels were set on an oyster farm and a horse farm respectively, but they both had significant dogs in them, too, so Scout was mollified. But when Scout got ahold of THE TESTAMENT OF HAROLD’S WIFE, imagine his outrage: it features a cat. Chickens. Deer. No Lab. Not even any other, lesser dog!  Imagine the degree of the insult, the sheer affront to his pride.

I have seriously tried to explain. “Scout,” I reasoned. People do care about animals other than dogs. Don’t you?”

“Whatever are you talking about?” he demanded. “Don’t be ridiculous. Give me a treat and try again.”

I can only hope that unlike Scout, my dog-devoted readers will stick with me to the end of THE TESTAMENT Of HAROLD’S WIFE, when Louisa clearly states her plan to get a new dog. And I hope that meanwhile, you’ll be delighted by the smart chickens on Louisa’s southeastern Indiana farm—and Marvelle, her uppity tuxedo cat—in whom she confides her Plan to bring to justice down on the drunk driver who set so much destruction in motion. And by the deer that Louisa will not allow to be hunted on her farm.

This is a novel that celebrates the connections that help us go on after overwhelming loss, whether they be between the still living, between people and dear animals, or people and land in which they are rooted. Ultimately, it’s a novel about strength and love.

Scout, however, is still annoyed. He’d like you to know that there are some wonderful stories about his exploits—which are what you should be interested in—on my website’s blog, LynneHugo.com, and pictures of him on Instagram, LynneHugoAuthor. He’s sure there are some on LynneHugoReader’s Page on Facebook, too, and if there aren’t enough, he says he’ll be sure that more get put up there. Here’s one now. He wants you to know that he’s posing against his will and says, “What kind of novel lacks a handsome, excellent-at-barking, noble Labrador retriever? It has a CAT. The prosecution rests.”